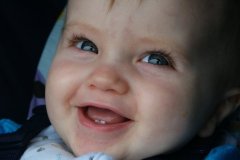 Last Thursday our baby turned four.  FOUR.  It sounds so cliche to say but HOLY HELL does time fly.  It seems like just yesterday I was telling Andy that if he really didn’t want three kids, I would be ok with it…only for him to tell ME that after years being convinced otherwise, he was now on board.

Yes.  That would be our Quinn.

While pregnant with Quinn, I was constantly reminded of my age.  Perhaps it was because I had two other kids to take care of or because it had been over four years since my body had been through this little nine-month roller coaster, but I like to think that it was because the OB nurses LITERALLY reminded me every time I saw them.

At 28 weeks along, we had a major scare; Quinn’s heart rate shot through the roof and as we were whisked off to labor and delivery, I’d never been so terrified in my entire life.  Was the baby going to die?  Was I going to die, leaving Andy to raise Ben and Georgia and this preemie?  It was horrible….for both of us.  Although his little heart fixed itself within an hour (apparently babies in utero “can just do that,” WHAAAT?!), it was a very tense last trimester and I knew I wouldn’t feel completely at ease until he was born healthy.

Well, he was.  VERY healthy.  And extremely explosive. 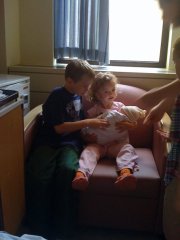 You see, our baby has been a tornado long before he even existed.  He kept us on our toes while in the womb and hasn’t stopped since.  Labeled a “Happy Spitter” by his pediatrician, he barfed for 10 months straight but never failed to grow.  He spent his first year being passed from one parent to another while his brother played soccer and baseball and served as a kind of mascot for the 9-year old Summer Travel team.  He was treated like a living baby doll by his big sister who, despite her 4 1/2 years, would pick him up every time I turned my back.  He has been loved. 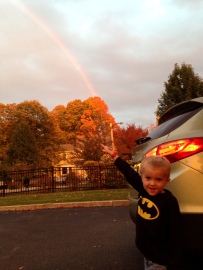 Of course, as he’s grown up he’s asserted himself into this family (and the world in general) like a tiny dictator when he so chooses.  A typical third child, he’ll bark when he wants something because if he doesn’t, he might not get heard.  He fought me for six months when it came to potty training (I’m forever scarred) but now frequently insists that I come admire his “handiwork.”  And despite a bad back, he can STILL get me to carry him when he wants.

That being said, he’s still the little boy who jumped out of the car with me on the ride home from daycare to admire a rainbow stretching across the afternoon sky.  His excitement upon finding his new Power Ranger Halloween costume was priceless (“IT’S THE BEST THING I EVER SAW!”) and I still can’t help myself from getting one last look at him before I go to sleep.  He has definitely been worth it all. 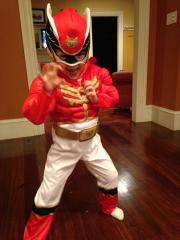 And besides, what other four year old do YOU know who’s poop “looks JUST like a dolphin?”  Kid’s a keeper.

Hope in a Changing World

Check out my "About" page for more details!

A quixotic quest for the bright side.

Plowing through Life in the Country...One Calf Nut at a Time

Michele Ragussis
Underachiever's Guide to Being a Domestic Goddess