Perhaps one of the most harrowing ordeals a parent can experience with her young daughter is the shopping excursion for a new bathing suit.  We had spent a few days on the Cape during last year’s February vacation and as any parent knows, the goal for this trip (in the kids’ eyes at least) is to spend 12 straight hours a day at the indoor pool.  Therefore, when 7-year old Georgia told me that her suits from the previous summer were too small, I took her word for it.  I mean, it could be that she had grown, right?  The thought of heading into her disaster of a closet (and risking never coming out again) scared me enough that I grabbed my American Express and we headed to the mall.

As expected, Georgia led me straight to Justice, her favorite store.  Never had the pleasure of shopping there?  Let me help: if the Disney Channel and Teen Nick had a lovechild and it launched a retail chain, Justice would be the outcome.  Any questions?

As we stood in front of the bathing suit wall, my jaw fell to the glitter-covered floor and I realized that Georgia had brought me there to buy a new style, not a bigger size.  Skimpy neon-colored bikinis with plunging necklines hung from ceiling to floor, and when I asked the sales clerk where the suits for my 7-year old were, she said I was looking at them. 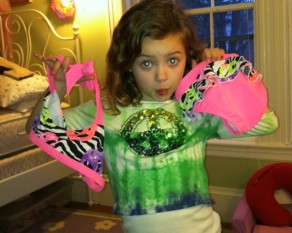 What’s worse is that Georgia had already grabbed two bikinis and was headed for the dressing room.  I frantically reached for a somewhat less-revealing two-piece and followed her inside.  As she pulled on the first top and visions of Toddlers and Tiaras flashed through my mind, I panicked.  How would I talk her out of this?  Would it be possible to convince her that Justin Bieber actually prefers one-piece suits?

“Hmmm, that one doesn’t look too comfortable.  You’ll be pulling it up the whole time.  Why don’t you try THIS one?  It has these little sparkles on it and everything!”

Wasted words, my friends.  She was twirling in the mirror to see it from all angles as I chattered on, extolling the virtues of the longer top that came down to her bellybutton.  “And this one will keep you warmer when you first get in the pool, while that bikini will let your stomach get cold so fast.”

Seriously?  This was the best that I had?  I embarrass even myself, but a woman backed up against a wall will grasp at anything.  I knew what had to be done; I was just hoping to avoid it.  However, the time had come.  I had run out of options.

Breathing deeply, I looked at my tiny 7-year old Sports Illustrated Swimsuit model-wannabe and gave it to her straight. “Georgia, I’m sorry, but that bathing suit is inappropriate for a little girl.  You need to get the other one.”

At that very moment I think I aged 15 years. Ugh.

Of course I got my way (I was the one paying, after all) and after a few minutes she had come around.  But, I saw a glimpse into my future and it scared me to my very soul.  Today it’s a bikini, but what is it tomorrow?  A bellybutton ring?  A car?  BOYS?

I fear that neither Andy nor I are ready for what lay ahead as she gets older.  While I hope she’ll see us as cool parents who understand, I expect that she’ll see us as nerdy conservative ones who love rules and won’t let her get away with anything.  And you know what?

That’s just fine with me.

Hope in a Changing World

Check out my "About" page for more details!

A quixotic quest for the bright side.

Plowing through Life in the Country...One Calf Nut at a Time

Michele Ragussis
Underachiever's Guide to Being a Domestic Goddess