Raise your hand if this is a familiar scene in your house: 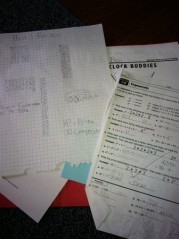 Dare I say that the dreaded homework is even more unpleasant for the parents than it is for the kids?

Okay, I may be exaggerating a little, but not by much.  Is it just me, or has math gotten really, really hard?  I remember the big four – addition, subtraction, multiplication and division – and I always thought that if you had a handle on those then you were in good shape.  Apparently, in the years between elementary school and working full-time where math consists of an excel formula or a number that your calculator spits out, there have been a few developments.

I’ve never claimed to have all the answers.  I am the first person to raise my hand and ask a question; in fact, the words “I don’t understand, can you explain that again?” will most likely be carved on my tombstone.  However, as a parent you want your kids to think that they can come to you for help and whether it is the correct spelling of “Tennessee” or “How do you do the Waltz?” (that was an actual Georgia question recently), you want to be able to help them as best you can.

I have found there to be five different kinds of Homework Parents.  Which one are you?

And so, fear not if you have found yourself scratching your head when asked for help in solving a word problem.  You’re not alone, and it makes you neither a bad parent nor a math dunce; it just makes you busy and real and, well, slightly flawed .  Like it or not, our kids already know that we aren’t perfect.  They don’t need Google to figure that out.

The way I see it, as long as I can pull off a decent waltz, I’m in good shape.